“Up Solar, Up Solar.” These were the euphoric chants of Mafolabomi who runs a small provision store in Igbonla community along the coast in Ilaje LGA in Ondo state.

The community, which has never been connected to the national grid, had depended on fossil fuel generators, candles, firewood, and kerosene lanterns for a long time.

However, in 2018 after A4&T Power Solutions, a renewable energy solar solutions company, got funded by United States African Development Foundation (USADF), a 30 kilowatts solar mini-grid was installed in the community the next year.

Mafolabomi had been spending an average of N30, 000 monthly on fuel to run her generator, but with the installation of the 30KW mini-grid, she would now cut her monthly expenditure by half.

Joseph Ojo, whose solar company executed the project, had embarked on what he called community scoping and survey which entailed community identification and assessment. He was excited to see how business activities in hotels, bars, and provision stores, among others, had opened up as a result of the solar solution.

Gwam community in Niger state, with a population of about 2000 and situated 20 kilometres from Minna, had also never been connected to the national grid.

After getting awarded to deploy the solar solution by USADF through their implementing partners in Nigeria, Diamond Development Initiative, the community started benefitting 24 hours electricity and arguably more power supply than those in urban areas.

Solomon Enejo who introduced solar power to the community said more can be achieved.

“We are not even using the full capacity of the 57kW installation,” he said.

While the solar option provides many Nigerians with reliable power supply, many are yet to understand the need for proper disposal of its components.

According to data by the World Bank, 85 million Nigerians lack access to electricity, representing 43 percent of the country’s population. This statistic makes Nigeria the country with the largest energy access deficit in the world. This has led to the increased need to bridge the energy deficit gap through alternative off-grid sources such as solar home systems, and solar mini-grid solutions among others.

In an analysis, the Nigeria Customs Service (NCS) and Deloitte show the rise in cumulative import value of panels, lead acid batteries, inverters and lithium-ion batteries between 1 January 2018 and 31 August 2021. 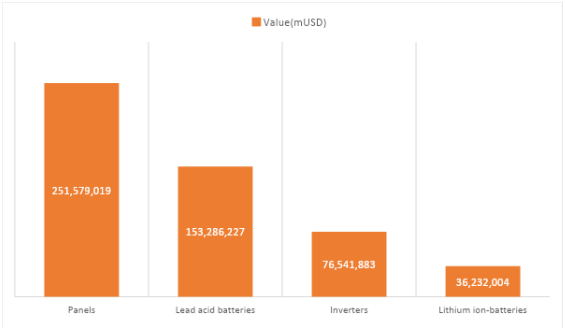 There has been a sporadic rise in the demand for solar installations, in a bid to solve the power problem, however, a greater challenge lurks ahead.

While the use of solar serves as a solution to the nation’s energy deficit, solar power components have a finite lifespan. Once these components reach their end of life, users are tempted to simply throw them away in landfills or hand them over to informal recyclers.

Based on the Basel Convention, decommissioned solar panels are considered e-waste while the batteries they use are categorised as battery waste due to their chemical composition. Nigeria does not have a national policy on recycling these wastes yet.

Solar panels have an average life span of 20 to 25 years, hence substantial waste volumes from panels are expected to build up around 2040. On the other hand, lithium-ion batteries are highly inflammable, thereby making the storage process quite tedious.

HOW CAN WASTE FROM GREEN ENERGY SOURCES BE DEALT WITH?

While some renewable energy companies are taking proactive steps to ensure proper disposal through registration with licensed bodies like the Alliance for Responsible Batteries Recycling (ARBR), which ensures proper off-taking and certification of their members, not all solar companies are registered to ensure proper disposal of end-of-life batteries and decommissioned panels.

Nigeria currently lacks a well-established system for collection, separation, storage, transportation, and disposal of e-waste as well as adequate enforcement and monitoring.

Ibukun Faluyi, executive secretary, E-Waste Producer Responsibility Organisation of Nigeria (EPRON), said the organisation tries to ensure a cost-effective producer management process whereby producers pay for the collection and recycling of products that they put on the Nigerian market according to their market share.

She said the Global Environment Facility (GEF) funded a pilot project in partnership with the United Nations Environment Program (UNEP) where 30 of the 34 collection centres in Lagos were mandated to register a minimum of 10 and a maximum of 15 informal recyclers. 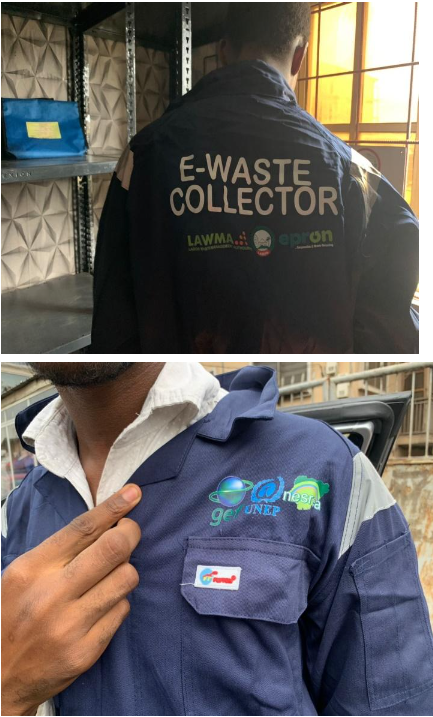 She, however, lamented that the organisation has not obtained the legal backing to fully implement and enforce the end of harmful recycling practices which according to her are “illegal and criminal”.

“The dropout is that the enforcement to discontinue these activities is not readily available. It has not been gazetted which is stalling the enforcement we expect to see. Google in partnership with EPRON have also made the identification of these collection centres in Lagos easily accessible using Google Maps,” she said.

Ikenna Ofoegbu, programme coordinator and energy policy analyst at Heinrich Böll Foundation, said there is a need to develop policies that put local recyclers at an advantage when sourcing e-waste.

He said: “Formal recyclers have an issue with the collection price difference between them and the informal off-takers i.e informal collectors are willing to pay N5, 000 for end-of-life batteries as they will sell at a higher price margin to exporters while formal collectors cannot pay the same.”

He added that prior to 2016 there were no policies for battery regulations on battery pollution. However, comprehensive policies have been developed by agencies such as REAN, GIZ, ministry of environment and are at the time of reporting, awaiting sign-off by the federal executive council.

Abdullahi, an informal e-waste collector, said he is one of the very few to work with an approved formal collector under the GEF and UNEP project as most of his colleagues run away from such collaboration with assumptions that their business will be taken away from them.

“This is how we make our money. My colleagues don’t like to work with these people,” he said.

While the current volume of solar components being recycled by the informal sector remains largely unknown as well as those being indiscriminately disposed of, recycling companies like Hinkley have said that the total volume of e-waste they recycle is within the range of 300 tonnes.

This is inclusive of solar components like lead acid and lithium-ion batteries which they recycle for reuse through an established partnership with Quadloop.

According to Adrian Clews, Founder of Hinkley Recycling, it is important to note that recycling e-waste is a business and someone needs to pay for the service in order to make the business both sustainable and profitable. He further noted that the downside of informally recycling these wastes is that the precious metals are removed while other parts are dumped without properly crushing the parts which are not used. 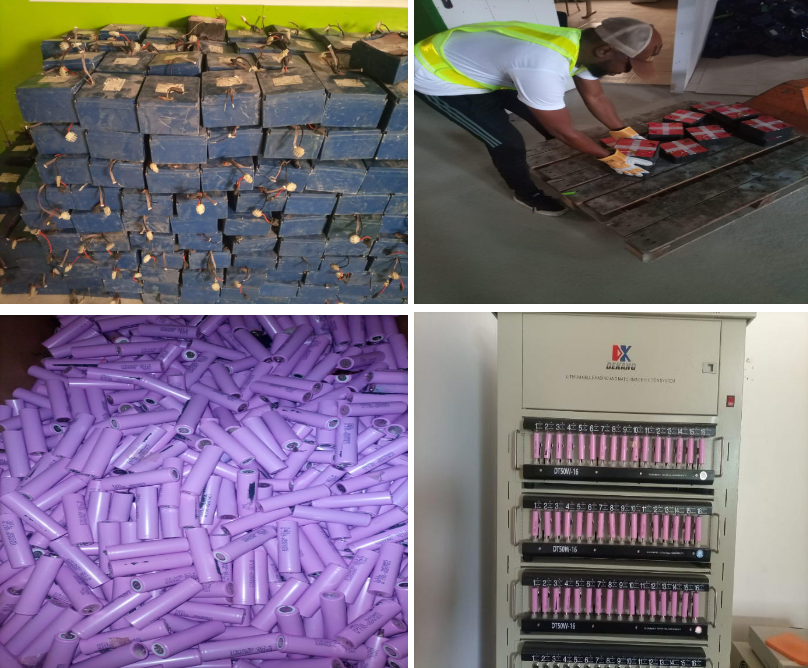 “E-waste can all be recycled but they cost money. If not properly disposed, the environmental impact is catastrophic. The risk of lithium-ion batteries, for example, is not environmental. It is a fire risk.”

Adria believes that for recycling to scale and expand to recycling solar panels, the government’s role is to put legislation in place that will give investors and recyclers the sense of being protected.

Lack of finance, awareness, advanced recycling technology, strong regulatory enforcement and limited government support are some other factors considered by recycling companies to be mitigating the adoption of formal recycling in Nigeria.

She said NESREA is working on a 10 years project with other stakeholders to tackle the menace of e-waste. She said the project, which has solar photovoltaic (PV) as one of its categories, would help ensure solar panels do not become a nuisance to the environment.

“Support for this report was provided by the Centre for Journalism Innovation and Development (CJID Africa) and it is made possible through funding support from The Bill & Melinda Gates Foundation.”

This story is published in partnership with Report for the World, a global service program that supports local public interest journalism.