It’s well known that us northerners are known for our courage, determination, quick wit and the ability to eat a vast quantity of gravy in one sitting. It’s no surprise therefore that many of us have gone down in the record books for our physical prowess, unbelievable feats and stacking washing machines into pyramids…

Highest jump by a llama

It’s no surprise that at least one northern record involved pudding. The largest Christmas pudding ever weighed 3.28 tonnes (7,231lb 1oz) and was made by the villager of Aughton, Lancashire, UK and officially unveiled at the Famous Aughton Pudding Festival held on 11 July 1992.

Most wins of the World Gravy Wrestling Championships (male):

In true northern style, Joel Hicks has won the World Gravy Wrestling Championships five times! Held annually outside the Rose ‘n’ Bowl pub in Stacksteads, Lancashire, UK, the culinary craziness has participants dressed in fancy dress and rolling around in gravy before being hosed off by the local fire service. Points are scored for fancy dress, comedic effect, entertainment and wrestling ability and Joel has managed to score the highest five times since 2007.

Highest voltage from a fruit battery

The highest voltage from a fruit battery is 2,307.8 volts, achieved by Saiful Islam (UK) and Royal Society of Chemistry (UK) in Manchester, UK, on 15 October 2021. The battery was made from 2,923 lemons and was powerful enough to set off a pyrotechnic display. When life gives you lemons…

Most wins of the World Gravy Wrestling Championships (female)

The most wins of the World Gravy Wrestling Championships by a woman is two, held jointly by Emma Slater (UK, winner in 2009, 2011) and Roxy Afzal, aka The Oxo Fox aka Foxy Roxy (UK, winner in 2017, 2018). The event has been held annually outside the Rose ‘n’ Bowl pub in Stacksteads, Lancashire, UK, since 2007, although the women’s competition did not start until 2008.

The largest washing machine pyramid is 1,496 and was achieved by Currys and Ainscough Training Services Ltd in Bury, Lancashire, UK, on 24 September 2021. The pyramid was made to highlight electronic waste and raise awareness of Curry’s recycling campaign. The pyramid was 44 ft 7 in, as tall as a Brachiosaurus!

Fastest time to set up and topple 10 books

Longest duration controlling a football on an elevated slackline

The longest duration controlling a football on an elevated slackline is 29.82 seconds and was achieved by John Farnworth, in Preston, UK, on 14 January 2016.

Highest voltage from a fruit battery

The highest voltage from a fruit battery is 2,307.8 volts, achieved by Saiful Islam (UK) and Royal Society of Chemistry (UK) in Manchester, UK, on 15 October 2021. The battery was made from 2,923 lemons and was powerful enough to set off a pyrotechnic display. When life gives you lemons… 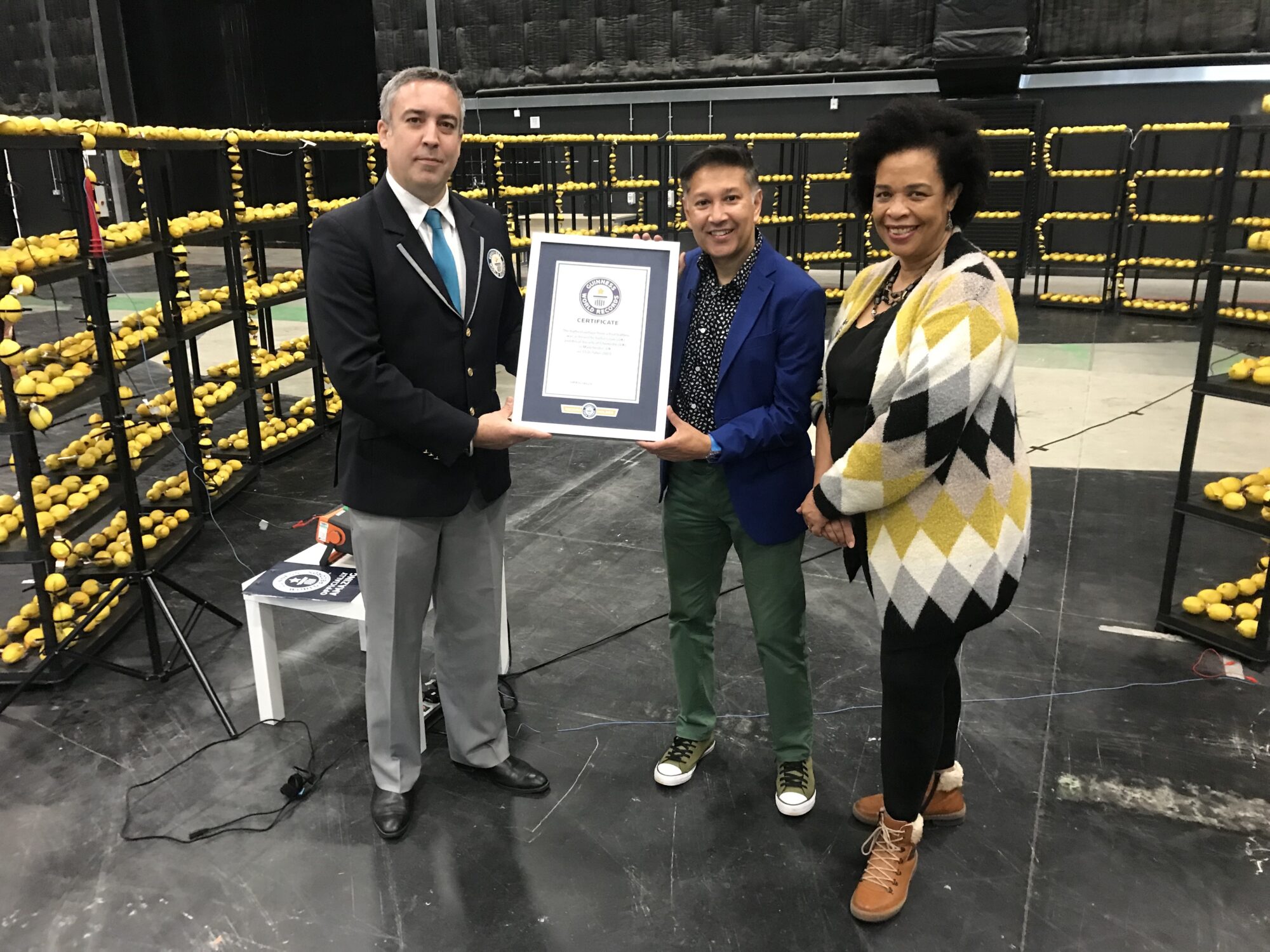 The tallest stack of chairs is 5.205 m (17 ft), achieved by Jay Ehsan in Manchester, UK, on 22 April 2021. During the attempt a number of chairs fell and broke, but Jay was eventually able to reach the desired height. 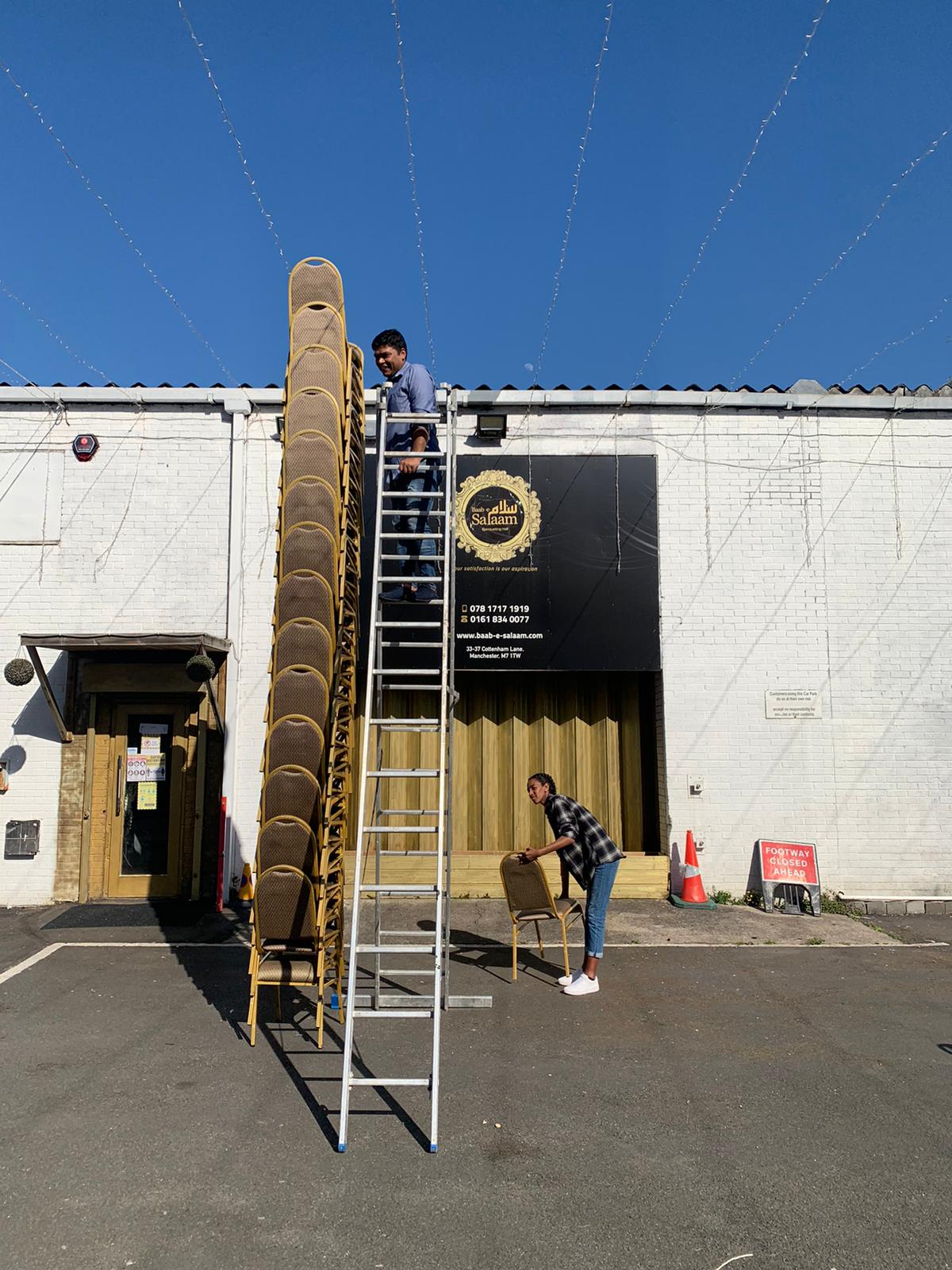 Most chainsaw juggling catches on a unicycle

The day the Space Cowboy came to Sheffield – Chayne Hultgren arrived in the city ready to stun audiences at the Officially Amazing at the Green Top Circus and they were definitely officially amazed when he managed to juggle 10 chainsaws whilst balancing on a unicycle.

The longest marathon playing fivea- side football is 75 hours (and you thought some of the World Cup matches went on a bit!). This threeday resilience test, or a bit of fun depending on how much you love football, was achieved by Maj Phil Sweeney, Cpl Stone, LCpl Passingham, Sgt Rickwood, Wo2 McNulty, Cpl Holden, Cpl Wroot, Sjt Sharp, Cpl Regan, Cpl Pettican, Cpl Brown, Cpl Wallace, Cpl Digman, Cpl Bucknall, Cpl Shaw in Catterick Garrison, North Yorkshire, UK, from 17 to 20 June 2021. 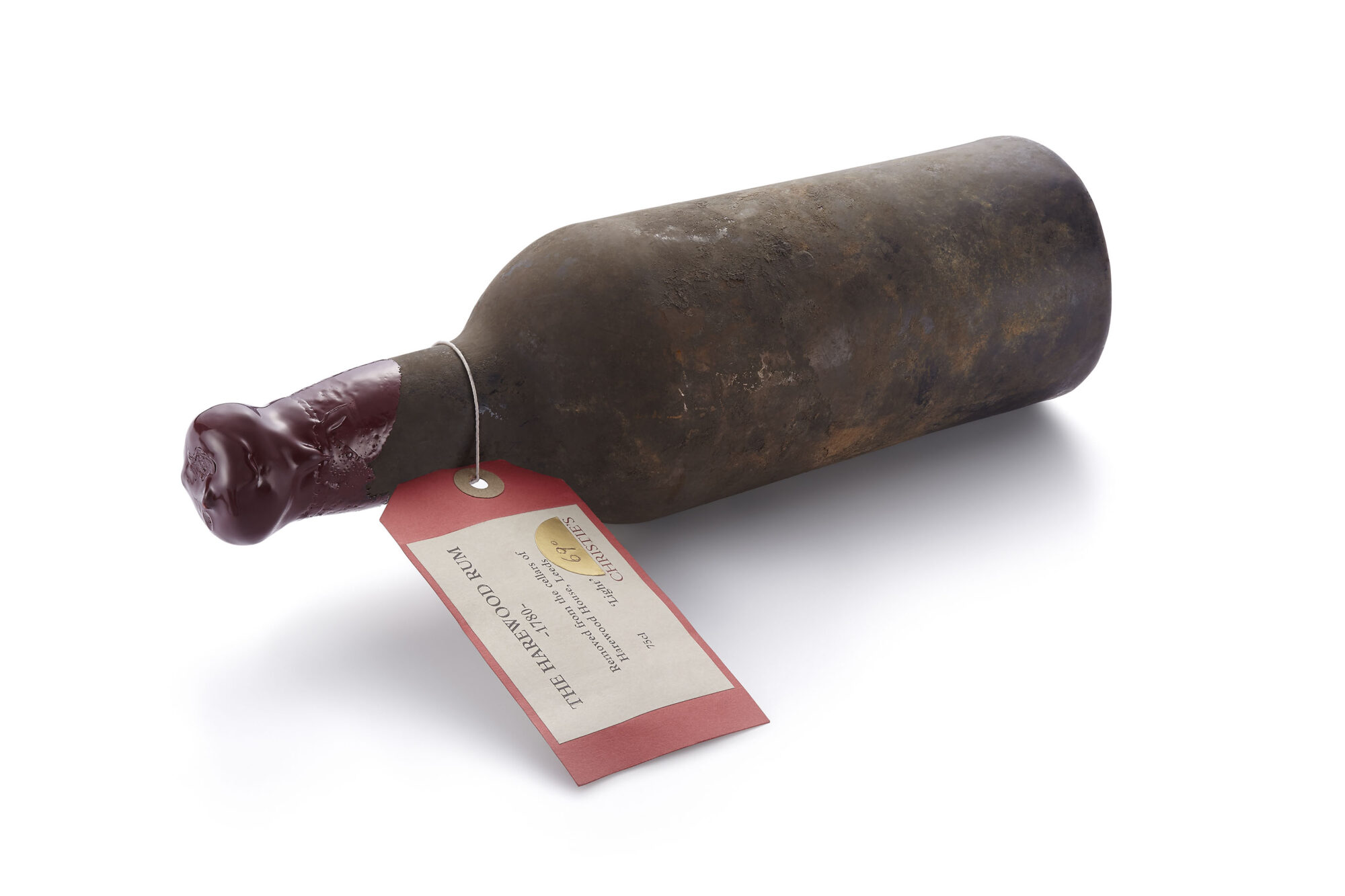 This strange tale begins not in the north of England but on the sunsoaked shores of the Caribbean in 1780. There, the Lascelles family had set out to make their fortune in the West Indies through cotton, sugar and rum. Their fortune enabled the family to build Harewood House in Leeds. In 2011, two staff were making an inventory of the house’s wine cellar when they came across 59 bottles in the back of the basement, covered in mould and dust. Known as The Harewood Rum, it is believed to have been distilled in 1780, in Barbados. Many of the bottles have now been sold for £8,000 each, quite a lot for a wee tipple!

Fastest time to complete 5 jumps by a rabbit

The fastest time to complete 5 jumps by a rabbit is 4.816 seconds, and was achieved by Penelope and Nicole Barrett (both UK), at the Bradford Premier Small Animal Show, in Doncaster, South Yorkshire, UK, on 18 January 2020. 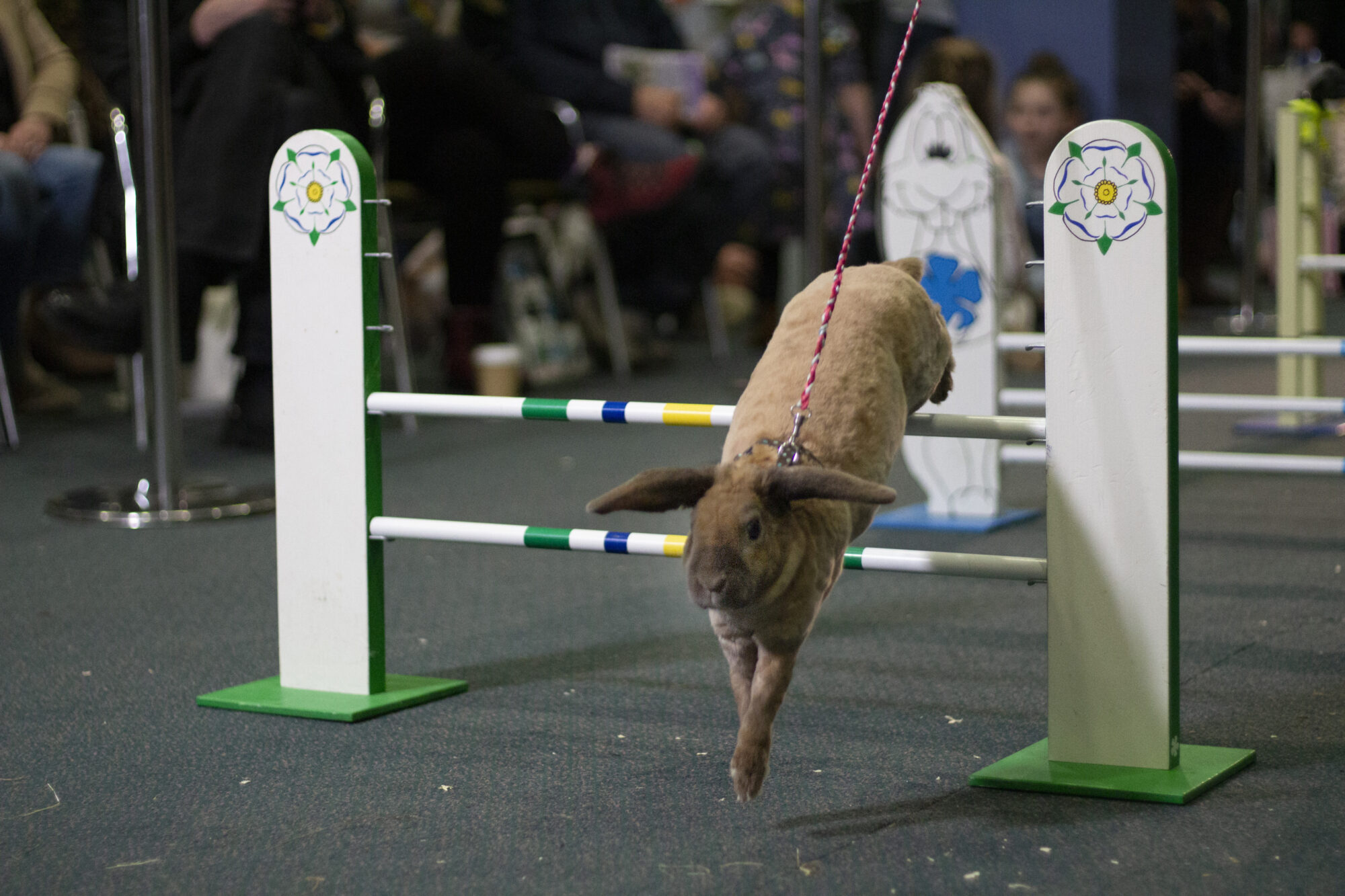 Most burpees in one minute (female) 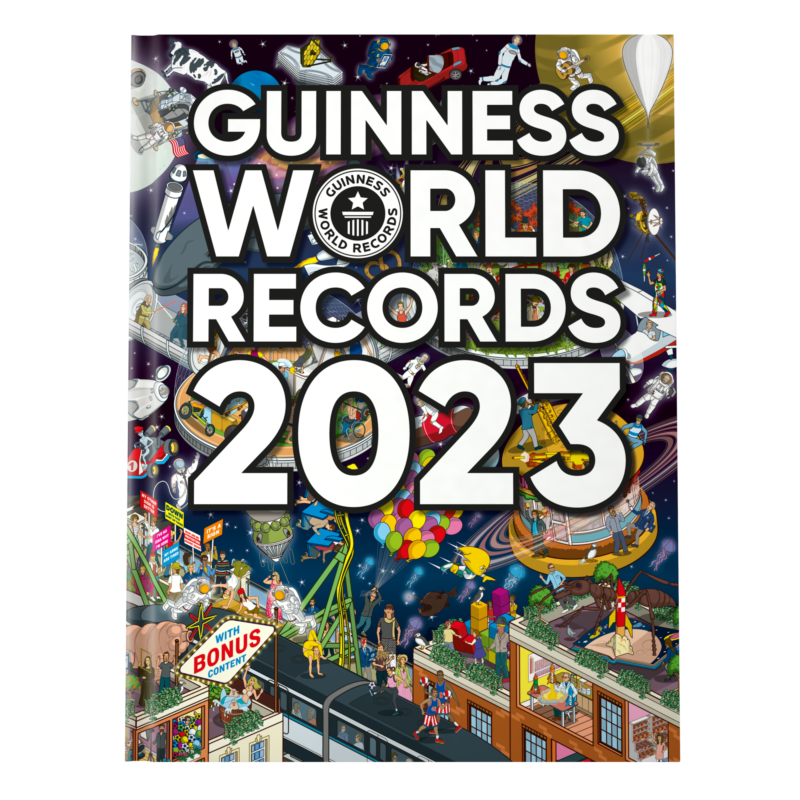