As the global energy and climate crises balloon, one remedy may lie in something as small as a beaker — the place where Lucas Bertucci got his start in sustainability research.

The chemical engineering student at the University of Kentucky is the first winner of the Lee T. Todd, Jr. Student Innovation Scholarship, giving him access to resources and mentorship, both scientific and entrepreneurial.

UK’s Center for Applied Energy Research (CAER) sponsors the scholarship which is funded through donations and focuses “on inspiring and training the next generation of Kentucky high-tech entrepreneurs.” It is named for UK’s 11th president, tech entrepreneur Lee T. Todd Jr.

Bertucci has spent much of his academic career in the laboratory focusing on recycling electronic waste.

As a freshman, he studied methods to recycle nickel-metal hydride batteries that power electric vehicles.

Later, he shifted to his first large-scale challenge, recycling metal waste. Over three years, the project expanded, along with his knowledge, producing a giant reactor that extracts pure metals like copper.

Now, in his senior year, Bertucci has turned his attention to optimizing solar panel recycling, his Todd Scholarship project.

It’s an area of sustainability that he says is largely overlooked.

“By 2030, end-of-life solar panels will be worth a combined total of $450 million in recycling potential,” Bertucci said. “While the green energy revolution is sweeping the globe, little consideration is being put into what to do with broken, old and unusable solar panels. My proposal for this program is to develop an environmentally friendly and economically sustainable process for recycling solar panels.” 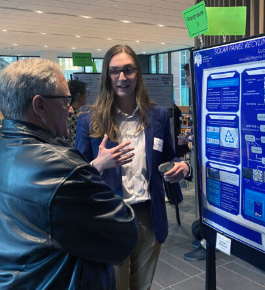 No matter the project, Bertucci’s passion for sustainable energy underscores his efforts. That passion, he says, is ignited by conventional misconceptions of the field. His latest venture is in collaboration with CAER researchers who he says are also Kentucky’s leading mining engineers and taught him the basics of recycling.

For the past three years, Bertucci has worked under the guidance of Jack Groppo and Josh Werner from UK’s Department of Mining Engineering. Groppo, a longtime CAER researcher, will serve as his research mentor as part of the Todd Scholarship.

“I am extremely proud of Lucas and thrilled he has this opportunity,” Groppo said. “Not only is he deserving of this opportunity, I think he has a chance to do great things. I look forward to continuing to work with him to see his dreams come true.”

Bertucci says, “People think that mining engineers just do coal; they are much more than that — and actually, in my opinion, quite essential to recycling.”

He says a better term for the field is “resource engineering” or “sustainability engineering.”

“Someone’s got to make the technology to push (the green revolution), and research is the only kind of way to do that and hopefully maybe change the world. That would be nice. I wouldn’t complain.”

Bertucci views recycling research as the catalyst to minimize future mining and its environmental and humanitarian impacts at a time when the manufacture of cellphones and other technologies is pushing up the demand for metals.

The metal mining industry brings about increased deforestation, soil erosion and contamination of the water and air that communities rely upon. And although artisanal and small-scale mining practices provide some economic opportunity to those in resource-rich, yet developing countries like the Democratic Republic of the Congo, they are extremely dangerous. These mining communities are rife with unregulated work zones, obsolete tools and child labor.

Additionally, pushes for sustainability promote American self-sufficiency, Bertucci said. “To put (it) to the more conservatively minded people … there’s a lot of issues that recycling solves on a sort of national security level — we’re not as reliant upon foreign sources.”

A Louisville native, Bertucci hopes to inspire change on the state and local levels. He thinks Kentucky can contribute to sustainability in unique ways, including the $5.8 billion electric-car battery plant in Hardin County that Ford and its Korean partner, SK Group, plan to open in 2025.

“It’s really awesome to have new battery plants come home to Kentucky. We’re centralized to a lot of big cities,” Bertucci said. “And while we’re at it, we should be the recycling capital of the world too.”

That’s where he hopes his ultimate goal — commercialization and implementation of solar panel recycling — will carry him, Kentucky and the nation in years to come.

That would fulfill the goals of the Todd scholarship, which CAER launched earlier this year. Rodney Andrews, CAER director, said the scholarship’s focus on student creativity and innovation is unusual. “In most cases, undergraduate researchers participate in research projects that are driven by their mentor. Which is fantastic — we need more Kentucky students involved in undergraduate research. But we also need students to work on their own ideas while also being trained and encouraged to commercialize those innovations. This is especially true as we look to transition our energy infrastructure.”

Todd, a graduate of UK and MIT and founder of two tech companies, said: “To have this scholarship focus on energy, innovation and commercialization makes it that much more special. … With young people like Lucas leading the way, Kentucky’s future is looking bright.”

Bertucci, who graduates in May, is pursuing minors in computer science, photography and mathematics. His sights are set on graduate school. Whether he ends up at MIT, Vanderbilt, Yale, Cornell, Carnegie Mellon or back at the University of Kentucky, sustainability research will continue to be a core part of his identity.

“Someone’s got to make the technology to push (the green revolution), and research is the only kind of way to do that and hopefully maybe change the world. That would be nice. I wouldn’t complain.”